Vancouver, B.C., January 18, 2018 – Group Eleven Resources Corp. (“Group Eleven” or the “Company”), is pleased to announce the results from an initial re-interpretation of existing seismic data (“the Study”) at the Ballinalack zinc-lead project in Ireland (“the Project”). The Project is a joint venture between Group Eleven (60% equity interest) and Shenzhen Zhongjin Lingnan Nonfemet Company Limited (“Nonfemet”; 40% equity interest), a China-based mining and processing company, representing one of the largest zinc producers in the world.

The Study has led to a new interpretation of the regional structure of the Ballinalack property, specifically in the vicinity of the historical estimate (7.7 million tonnes grading 7.3% Zn+Pb).

Highlights of the Study:

“We are very pleased to see such exciting results come from the very first steps in our on-going program to leverage the latest geological thinking and geophysical technology towards systematically rethinking key aspects of the Irish zinc district” stated Bart Jaworski, CEO.

“While at a preliminary stage, the new seismic re-interpretation is a radical rethink of the structural framework of the Ballinalack area and could be transformational for the Project. Importantly, the Study has potential to add high-priority drill targets which would complement our already exciting suite of targets along strike and at depth from the historical estimate. We look forward to the start of our upcoming drill program, as well as, the continuation of our regional rethink on the balance of our 320,000-hectare land package across the historically overlooked part of the camp in south-western Ireland.”

Drill Program to commence:
Group Eleven’s Phase 1 drill program at Ballinalack (totalling approximately 3,700 metres) is scheduled to commence over the next few weeks. Drilling will focus on:

Details on the Study:
The Study was conducted by Alastair Beach, Ph.D., who aimed to provide a preliminary independent view of the structural setting of the Ballinalack occurrence with the view to present a framework for further evaluation.

Dr Beach is a renowned expert on seismic interpretation and structural geology. Importantly, Dr Beach was a key contributor (along with Dave Coller) to the seismic interpretation at Boliden’s Tara (Navan) mine in Ireland, which led to the recent (2012) ‘Tara Deeps’ discovery (currently hosting an inferred resource totalling 10 million tonnes grading 8.5% Zn and 1.8% Pb; Boliden, Annual Report, 2016).

The previous operator of Ballinalack (Teck Ireland Ltd.) conducted 63 line kilometres of 2D seismic on the Project from 2010 to 2013. Of this, two seismic lines (see Figure 1) totalling 12.6 km were interpreted as part of the Study: 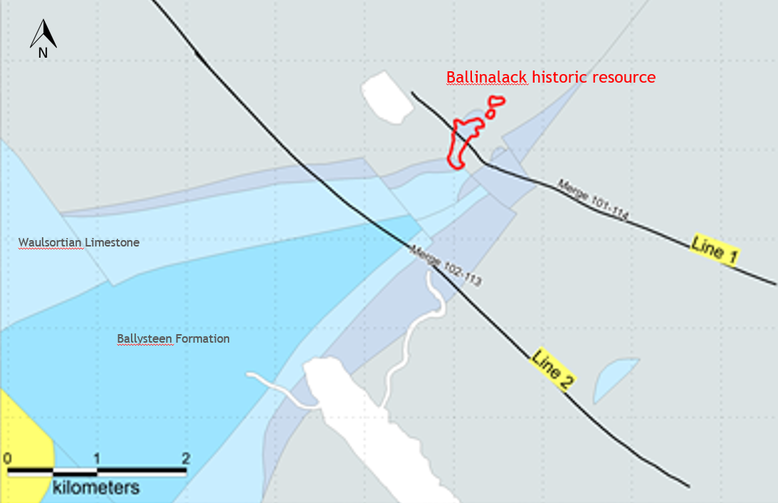 ​The previous interpretation at Ballinalack shows the main fault in the region as the Ballinalack fault, dipping to the NW (see bottom of Figure 2). 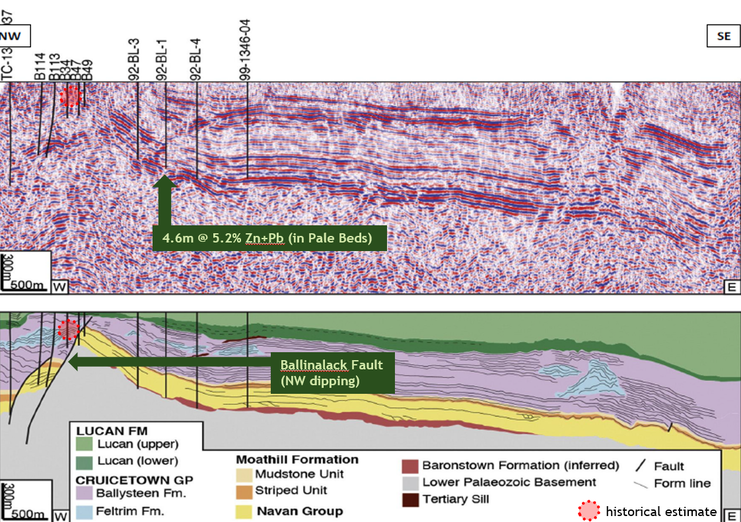 ​The Study shows that there appears to also exist a larger structure (the “New Fault”) with dip and down-throw to the SE (Figure 3). The New Fault and possible rifting has not been previously recognized.

Specific implications of the above re-interpretation include:

Other Matters
The Company has also, subject to regulatory approval, retained Venture Liquidity Providers Inc. (VLP) to initiate its market-making service to provide assistance in maintaining an orderly trading market for the common shares of the company. The market-making service will be undertaken by VLP through a registered broker, W.D. Latimer Co. Ltd., in compliance with the applicable policies of the TSX Venture Exchange and other applicable laws.

VLP is a specialized consulting firm based in Toronto providing a variety of services focused on issuers listed on the TSX Venture Exchange. For its services, the Company has agreed to pay $5,000 per month for a period of 12 months. The agreement may be terminated at any time by the corporation or VLP. The corporation and VLP act at arm's length, and VLP has no present interest, directly or indirectly, in the Company or its securities. The finances and the shares required for the market-making service are provided by W.D. Latimer. The fee paid by the Company to VLP is for services only.

Qualified Person
EurGeol, P. Geo. John Barry, a Qualified Person as defined by NI 43-101 and the Vice President, Exploration Strategy of the Company, has reviewed and approved the scientific and technical information set out in this news release.

Cautionary Note Regarding Forward-Looking Information
This press release contains forward-looking statements within the meaning of applicable securities legislation. Such statements include, without limitation, statements regarding the future results of operations, performance and achievements of the Company, including the timing, content, cost and results of proposed work programs, the discovery and delineation of mineral deposits/resources/ reserves and geological interpretations. Although the Company believes that such statements are reasonable, it can give no assurance that such expectations will prove to be correct. Forward-looking statements are typically identified by words such as: believe, expect, anticipate, intend, estimate, postulate and similar expressions, or are those, which, by their nature, refer to future events. The Company cautions investors that any forward-looking statements by the Company are not guarantees of future results or performance, and that actual results may differ materially from those in forward looking statements as a result of various factors, including, but not limited to, variations in the nature, quality and quantity of any mineral deposits that may be located. All of the Company's public disclosure filings may be accessed via www.sedar.com and readers are urged to review these materials, including the technical reports filed with respect to the Company's mineral properties, and particularly the technical report entitled “NI 43-101 Independent Report on a Base Metal Exploration Project at Ballinalack, Co. Westmeath, Ireland” with an effective date of November 20, 2017 by John Kelly and Paul Gordon (SLR Consulting Ireland) with respect to the Ballinalack Property.