Vancouver, Canada, September 10, 2020 - Group Eleven Resources Corp. (TSX.V: ZNG; OTC: GRLVF; FRA: 3GE) (“Group Eleven” or the “Company”) is pleased to announce that it has commenced drilling at the Stonepark zinc project (“Stonepark”) in the Republic of Ireland. Stonepark is a joint venture between Group Eleven (76.56% interest) and Arkle Resources PLC (23.44% interest). Plans for follow-up drilling at the Company’s Carrickittle zinc prospect (“Carrickittle”) located on the 100%-interest PG West zinc project in Ireland are nearing completion and will be announced over the next few weeks.

“We are excited to start drilling at Stonepark and look forward to updating the market on plans for follow-up drilling at Carrickittle in a few weeks,” stated Bart Jaworski, CEO. “The Limerick basin is proving to be a very prospective zinc-lead camp and we look forward to progressing exploration in the near-term.”

Other Ongoing and Upcoming Drill Programs

At Carrickittle, the Company recently announced the discovery of high-grade zinc-lead mineralization (hole G11-2840-04 intersected 10.3 metres of 14.6% zinc, 5.0% lead (19.6% combined) and 43 g/t silver, interpreted to be approximately true width, starting at 56.3 metres downhole; see news release dated July 6th, 2020). Plans for follow-up drilling are nearing completion and will be announced over the next few weeks.

On its regional targets within the remainder of its PG West project (see news release dated May 28th, 2020), Group Eleven has now finished drilling and results are expected over the coming few weeks, once laboratory analyses are received, compiled and interpreted. 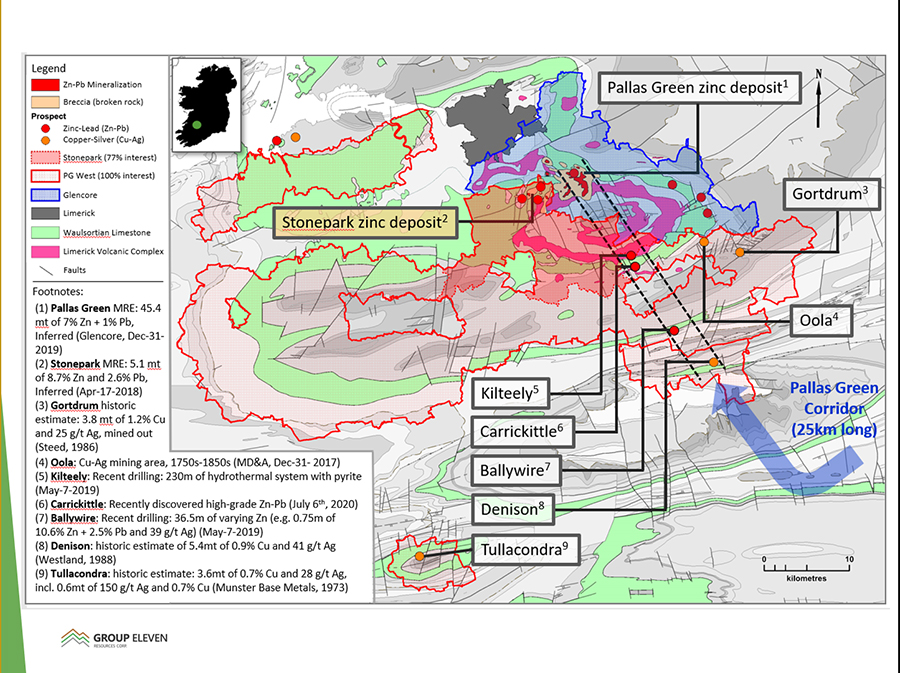 The Company is also pleased to note that it has been granted prospecting licenses covering the Tullacondra copper-silver prospect, located in the general PG West project area (see Exhibit 1 and news release dated April 22nd, 2020).