Vancouver, Canada, January 28, 2021 - Group Eleven Resources Corp. (TSX.V: ZNG; OTC: GRLVF; FRA: 3GE) (“Group Eleven” or the “Company”) is pleased to announce plans for follow-up drilling at the Carrickittle prospect (“Carrickittle”) at its 100% interest PG West project (“PG West”) and provide a general update on exploration at its zinc-lead and copper-silver projects in the Republic of Ireland.

As previously announced (see news release dated December 9th, 2020), a silver-rich zone (736 g/t silver over 1.0 metres, starting at 71.0 metres hole depth) was encountered at Carrickittle in hole G11-2840-11. Further inspection of the zone identified a narrower (20-centimetre) interval consisting of pale-grey Waulsortian limestone with veinlets of sphalerite and galena, with possible finely disseminated silver-grey sulphides and/or native silver. Point X-Ray Fluorescence (pXRF) analysis over this zone yielded a grade of 3,961 g/t silver (averaged from 20 pXRF sample points over 20 centimetres) with negligible silver in the surrounding host rock. These high silver levels are consistent with grades implied by back-calculating the above assayed sample for the narrower interval.

Further investigation is underway, consisting of thin section (microscope) analysis aimed at confirming the mineral species hosting silver. To management’s knowledge, the above narrow interval represents one of the highest silver grades ever attained in Ireland.

The upcoming follow-up drilling at Carrickittle will focus on Zone 2 and is expected to start mid-February 2021, totalling approximately 400 metres. A larger subsequent drill program focussing on Zones 3 and 4, as well as, the one-kilometre strike extent to the north, is currently in planning stages and will be announced in due course. Once drilling starts in mid-February, management aims to drill continuously for the remainder of 2021 with total metreage expected to be approximately 5,000 metres. This anticipated level of drilling is fully funded and would represent by far the highest level of drilling at PG West since inception of the Company. Some of this year’s drilling will include prospects outside of Carrickittle (as discussed below).

Over the last few weeks, a trial induced polarization (“IP”) survey was completed over Zones 1 and 2 at Carrickittle. This trial appears to have detected massive sulphides at each zone (yielding chargeability-high anomalies coincident with both known mineralization and mineralization projected along strike). To confirm and build upon the above preliminary results, a more comprehensive IP survey is currently underway, focussing on Zones 1-4 (totalling 2,400 metres within four lines spaced 50 metres apart and with 25-metre station spacing; to be completed in the next few weeks). IP surveys could significantly help exploration efforts aimed at discovering more massive sulphide at Carrickittle.

To keep core ground in good standing and continue building a pipeline of exciting targets, exploration is ongoing on the Company’s other prospects (see Exhibit 1) within the 100%-interest PG West project. The work sequence is expected to be as follows:

Importantly, the above projected exploration activities are subject to Covid-19 restrictions in Ireland. While the Company’s recent work programs have been relatively unimpeded, there is a risk that tighter restrictions may impact the Company’s ability to conduct fieldwork.

In line with the Company’s more-focussed exploration strategy announced on April 21st, 2020, the Group Eleven has surrendered more non-core ground, including the western-most part of the PG West property (see Exhibit 1). This portion of the PG West property was the most early-stage of the package and deemed to be least prospective. 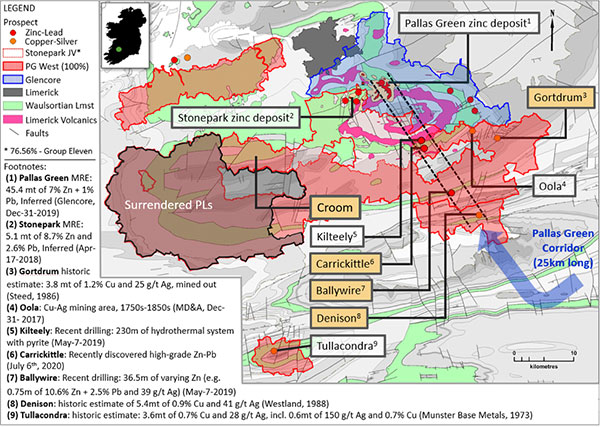