“We are encouraged that Group Eleven’s first-ever drill campaign at Gortdrum has been successful in demonstrating the potential scale and tenor of this impressive copper-silver prospect,” stated Bart Jaworski, CEO. “Gortdrum was the first asset acquired by the Company and, after being effectively off-the-market for over 40 years previously, it is great to see this prospect finally get the attention it deserves. Gortdrum is integral to our flagship PG West zinc project in the Limerick Basin and is thought to represent the copper-rich ‘roots’ of the zinc prospects in the area.”

“Now that detailed data-compilation has been completed, we’ve been pleasantly surprised at just how extensive and continuous the zone of shallow copper mineralization appears to be. We see a lot of scope for a step-change at Gortdrum given most historic holes were drilled vertically (on very steep structures), very few historic intercepts were assayed for silver and prospective NW-trending splay faults do not appear to have yet been explored.”

Note: True widths for both holes are estimated to be approximately 60%; CuEq combines copper and silver grades into a ‘copper equivalent’ grade, based on copper prices of US$4.00/lb and silver prices of US$25.00/oz 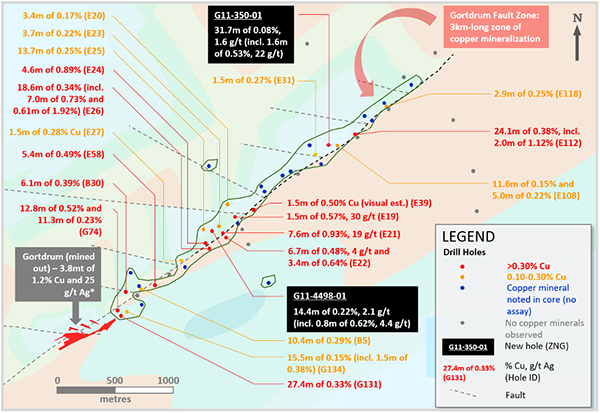 Note: * Gortdrum is a historical estimate (see disclosure below); most historical intercepts were not assayed for silver (it should not be assumed that such intervals do not contain silver). 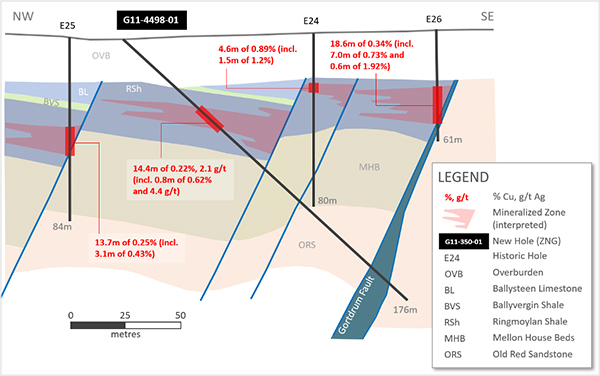 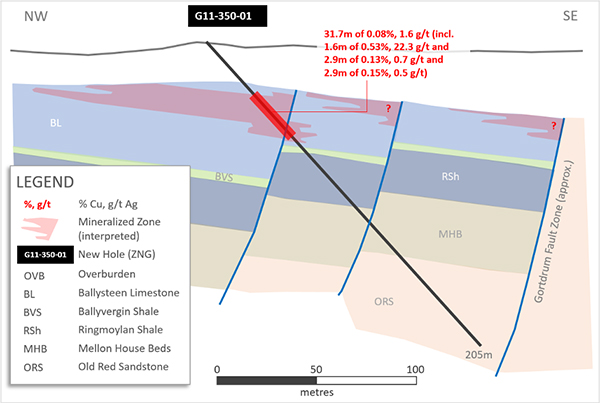 The above results suggest that mineralization is associated with a series of steeply-dipping and sub-parallel faults within the Gortdrum Fault Zone (see Exhibit 2, 3 and 4). In general, mineralization appears to have some stratigraphic control (i.e. laterally), however, it is locally hosted by steeply-dipping veinlets and micro-faults, similar to mineralization at the old Gortdrum mine. Most historic holes were drilled vertically on these steep structures, suggesting the highest grading zones (adjacent to faults) may have been missed. It is also noted that very few historic intercepts were assayed for silver, despite the fact that grades of up to 30.2 g/t silver have been intersected (see Exhibit 5). Lastly, NW-trending splay faults which occur along the Gortdrum Fault Zone, do not appear to have yet been explored – despite the fact such orientations are clearly controlling parts of the Gortdrum historic resource (see Exhibit 2).

Note: E39 represents a visual estimate noted in historical drill logs; CuEq combines copper and silver grades into a ‘copper equivalent’ grade, based on copper prices of US$4.00/lb and silver prices of US$25.00/oz.

The Gortdrum historical estimate2 was discovered in 1966 and was mined (via open pit) from late-1967 to mid-1975 (7.5 years), producing 38 thousand tonnes of copper and 2.9 million ounces of silver. Approximately 500,000 tonnes of high-grade copper remain un-mined on the east-end of open pit (at approx. 100 metres depth). Exploration drilling ceased in 1975 and the prospect lay dormant for over four decades as a prospecting licence was not reinstated over the mine site after mining lease (SML89) expired in 1986. This oversight was identified by Group Eleven in 2014 and the Gortdrum prospecting licenses were awarded in February 2015. In addition to Gortdrum, Group Eleven also owns the only other known advanced copper-silver prospects in Ireland: Denison and Tullacondra (see Exhibit 6). 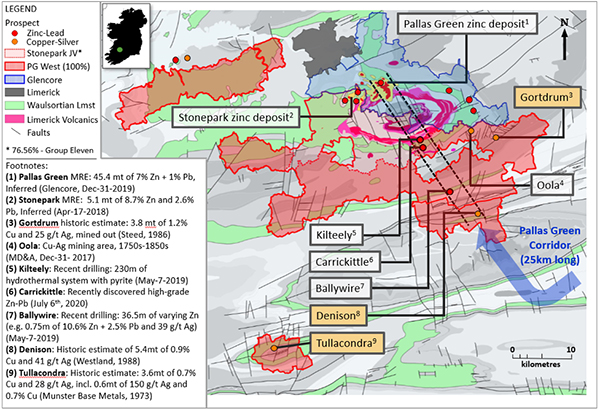