“Along with our extension of Zone 1 by 30% to a strike of 130m, our northerly holes add further evidence that the mineralizing system seen at Zones 1-4 likely continues NW and beyond,” stated Bart Jaworski, CEO. “This justifies our recent move to start drilling at the Carrickittle North and West prospects1. Meanwhile, a large and prospective 950m x 750m area remains undrilled at the centre of the Carrickittle prospect. We look forward to testing this zone in the next few months, with a view to finding a wider ‘blow-out’ of Zone 1. Separately, our ongoing drilling at the Stonepark JV is progressing on schedule and we look forward to starting our drill program at Ballywire in the coming weeks. With two rigs and over 6,000m of drilling planned this year, 2022 is poised to be our busiest year to date.”

Location of Tullacondra and Carrickittle Prospects at and near PG West Project (100% interest), Ireland 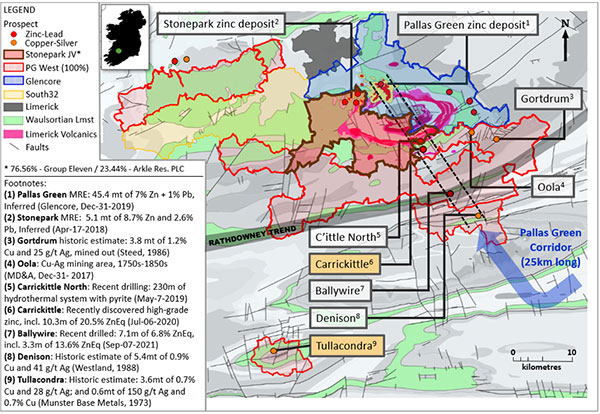 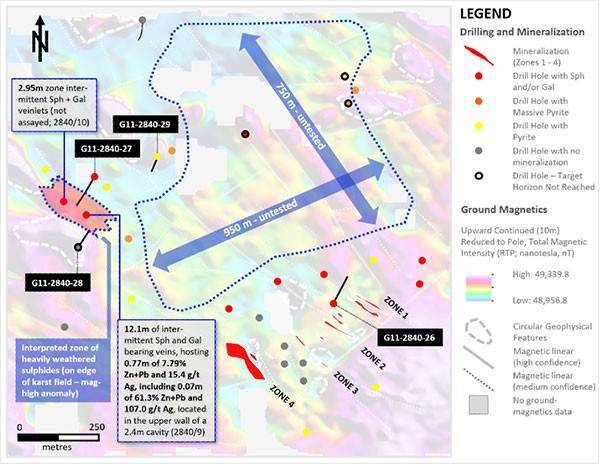 Note: New holes denoted with black labels; Outline of Zone 1 mineralization is shown as prior to extension by G11-2840-26; all historic drilling shown above, except for tight-spaced drilling at Zones 1 to 4; ‘Sph’ mean sphalerite, ‘Gal’ means galena

Although weaker than the massive sulphides recently intercepted at Zone 1 (e.g., 7.2m of 30.5% Zn+Pb and 108 g/t Ag2), the above intercept is approximately ten times wider (at similar grades) versus the next nearest pierce point along the modelled lens (0.91m of 0.51% Zn+Pb in historic hole P21; see Exhibit 3). The above intercept also occurs on-trend as predicted, adding further confidence to Group Eleven’s exploration model. Follow-up drilling is being finalized to test the possibility of mineralization widening further towards the NW in an un-drilled area measuring approximately 750m by 950m, immediately north of Zone 1 (see Exhibit 2).

Two holes (G11-2840-27 and -28) were drilled in the NW portion of the Carrickittle prospect, approximately 750m NW of Zone 1 (see Exhibit 2). This locality was drilled historically (in 2000) yielding a 12.1m zone of intermittent sphalerite and galena bearing veins, including a zone of clay and massive sulphide which averaged 0.77m of 7.79% Zn+Pb and 15.4 g/t Ag, including 0.07m of 61.3% Zn+Pb and 107.0 g/t Ag, located in the upper wall of a 2.4m cavity (historic hole 2840/9). Historic hole 2840/10, drilled approx. 100m to the NW, intersected a 2.95m zone with intermittent sphalerite and galena veinlets (not assayed). Importantly, both historic holes had large (7.8m and 1.7m, respectively) cavities at the base of the Waulsortian limestone and hence, the target horizon remained untested.

Note: True width of hole -26 is estimated at 81%, whereas for holes -27 and -28, true widths are unknown; “WL Lmst” means Waulsortian limestone; “dyke” is an intrusive rock; “dol” means dolomite (a magnesium alteration of limestone); “Volc vent” means volcanic vent; Intercept noted for G11-2840-28 is one of eight clay samples which each returned over 300 ppm Zn+Pb;

The aim of Group Eleven’s drilling in this locality was to drill in the vicinity of the above historic holes and test the base of the Waulsortian limestone (target horizon), while also assessing the nature of the prominent NW-trending magnetic-high anomaly in this area (see Exhibit 2).

G11-2840-27, drilled in between the two historic holes, returned 1.15m of 0.61% Zn+Pb in dolomitized Waulsortian limestone approximately 10-15m above the target horizon. A number of cavities were encountered in the hole and specifically, a large (5-10m) cavity was encountered at the base of the Waulsortian limestone (target horizon), similar to historic drilling. Sampling of residual clays recovered from this cavity returned very anomalous Zn+Pb levels (1.10m of 1926 ppm, including 0.60m of 2,035 ppm) suggesting mineralization was likely present before being weathered out in-situ.

G11-2840-28, drilled 50m SE of historic drilling, encountered an even higher number of cavities (with recoveries averaging only 45%), resulting in the loss of the hole at 113.5m (vs. anticipated target horizon at 200m). Samples collected across the recovered karst clays returned anomalous Zn+Pb levels (300-495 ppm). It is unclear if higher Zn+Pb levels (similar to G11-2840-27) would be observed in cavities closer to the target horizon (i.e., if the hole was completed). Despite not being completed, G11-2840-28 definitively shows the large mag-high feature on the west of this target area reflects karstic Waulsortian limestone. It is unclear if karst is spatially related (i.e., via preferential weathering) to mineralization in this area.

Despite not being able to directly test the target horizon, the above two holes are encouraging given they corroborate the presence of massive sulphide mineralization intersected in nearby historic drilling and suggest more high-grade mineralization may be in close proximity. Further work would be needed outside of the magnetic-high anomaly (i.e., outside the karst field; see Exhibit 2) in order to test for better-preserved zinc mineralization.

The fourth hole (G11-2840-29) was drilled by Group Eleven testing a circular magnetic-high feature (see Exhibit 2). The hole confirmed the presence of a volcanic vent and intersected a highly-brecciated and locally pyrite-rich package of Waulsortian limestone, including black-matrix breccia (“BMB”, an important pathfinder for zinc in Ireland). The BMB intersected is similar to BMBs observed at the Company’s Stonepark zinc deposit4, located 10km to the NW. The base of the Waulsortian limestone was faulted with approximately 20m of underlying lithologies removed, suggesting the hole was only a partial test of the target horizon.

Overall, this hole implies that the circular magnetic-high features located at the north side of the Carrickittle prospect (see Exhibit 2), likely represent volcanic vents. Given they seem to generally occur along a broad EW trending belt across the prospect, suggests a structural zone parallel to the southern edge of the Limerick Volcanic Complex. This structural zone is likely to be prospective for zinc mineralization, especially towards the north.

Group Eleven inserts certified reference materials (“CRMs” or “Standards”) as well as blank material, to its sample stream as part of its industry-standard QA/QC programme. The QC results have been reviewed by the Qualified Person, who is satisfied that all of the results are within acceptable parameters.

Technical information in this news release has been approved by Paul Gordon, P.Geo., geological consultant at SLR Consulting, and independent ‘Qualified Person’ as defined under Canadian National Instrument 43-101.