“Originating at a property-scale, our search for the hypothesized ‘mirror-image’ of the Pallas Green deposit1 is now zeroing in on a very specific target, approximately 500m by 2km in area,” stated Bart Jaworski, CEO. “More generally, the southern half of the LVC is starting to emerge as the side hosting major faulting and collapse features – a geological environment conducive to forming major zinc deposits. The above Carrickittle North and West holes represent the first substantial tests of the southern margin of the LVC, and results thus far strongly corroborate management’s view that this area has the potential to host zinc mineralization similar in style and scale to Glencore’s nearby Pallas Green deposit. Follow-up drilling is strongly warranted.”

The Stonepark zinc project is owned 76.56% by Group Eleven (operator) and 23.44% by Arkle Resource PLC. The property hosts a mineral resource estimate (“MRE”) totalling 5.1 million tonnes of 8.7% zinc and 2.6% lead (11.3% combined; see Note (b) below), located 1-2 kilometres west of Glencore’s Pallas Green zinc deposit1 (see Exhibit 1). The Carrickittle prospect on the PG West property (100%-interest) extends northward and westward onto the Stonepark property (at the ‘Carrickittle North’ and ‘Carrickittle West’ localities), as evidenced by the presence of alteration, prospective faulting and local zinc mineralization. 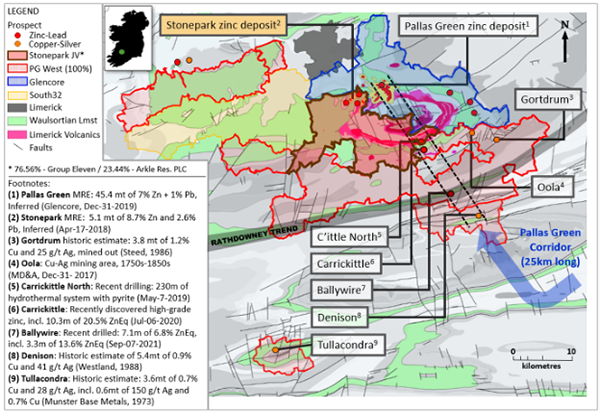 Both the Stonepark and Pallas Green1 zinc deposits are located on the north side of the Limerick Volcanic Complex (“LVC”; see Exhibit 2). Prior to the currently reported drill program (and with the exception of Group Eleven’s hole, G11-450-02 drilled in 20192 and a historic hole from 1998), the south side of the LVC was completely un-drilled. 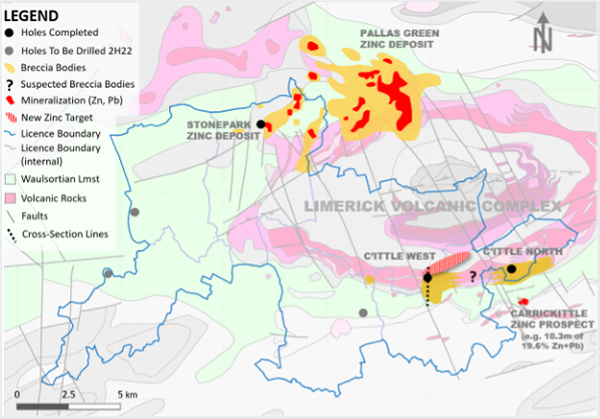 As previously announced, the Company’s 2022 fully-funded drill program at Stonepark totals six holes and 2,300m. This program is now 82% complete, with three holes totalling 1810.6m completed (see Exhibit 2 and 3). The remaining three holes (totalling 400m) are planned to start after ongoing drilling at the Company’s Ballywire prospect (PG West Project; see Exhibit 1) is completed over the next two months.

Of the above, holes from Carrickittle North and West, respectively, are especially significant as they represent the first substantial steps into the south side of the LVC, testing potential for a ‘mirror image’ to the Pallas Green deposit2. Specifically, the aims of these two holes were to determine whether: (i) Waulsortian limestone is present under the volcanic cover; (ii) significant amounts of faulting and/or brecciation exist within the Waulsortian Limestone; and (iii) if any zinc mineralization is observed.

Both holes confirmed the presence of thick Waulsortian limestone and brecciation (with extensive pyrite mineralization). Drilling at Carrickittle West (G11-2531-01), however, also intersecting a major fault structure with a large (at least 150m) vertical displacement and associated zinc mineralization interpreted to have been transported along the fault from the target horizon below (see Exhibit 4). 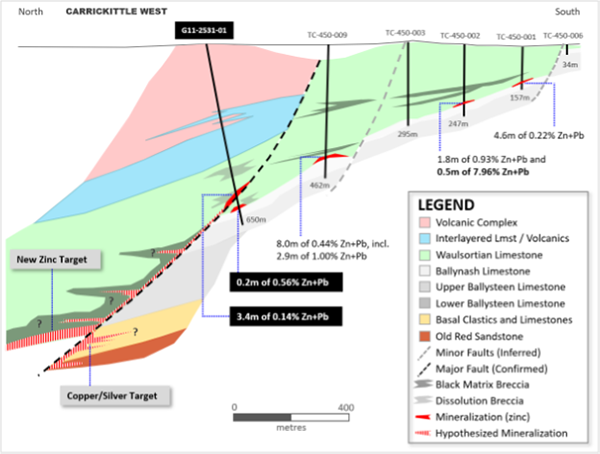 This represents Group Eleven’s first direct intercept of a major fault in Limerick region (PG West and Stonepark projects). Specifically, G11-2531-01 intersected a zone in the hanging wall of the fault hosting weak pyrite and arsenopyrite mineralization within a dolomite-altered Waulsortian Limestone, extending 13.9m from the fault, as well as, traces of very pale sphalerite in late fractures within 5-6m of the structure (including 3.44m of 0.137% Zn+Pb, starting at 539m; see Exhibit 4 and 6), suggesting movement of mineralizing fluids along the fault. In the footwall, alteration and brecciation was intersected at the base of the Waulsortian Limestone with traces of sphalerite occurring both in the highly altered carbonates and within the cross-cutting dykes (including 0.19m of 0.558% Zn+Pb).

Overall, this hole is encouraging as it directly points to a large and compelling zinc target a few hundred metres to the north, where the major fault would notionally intersect the target horizon (i.e. base of the Waulsortian Limestone, in the hanging wall of a normal fault). Additionally, a nearby copper-silver target is also hypothesized to exist in the footwall of the main fault (see Exhibit 4). 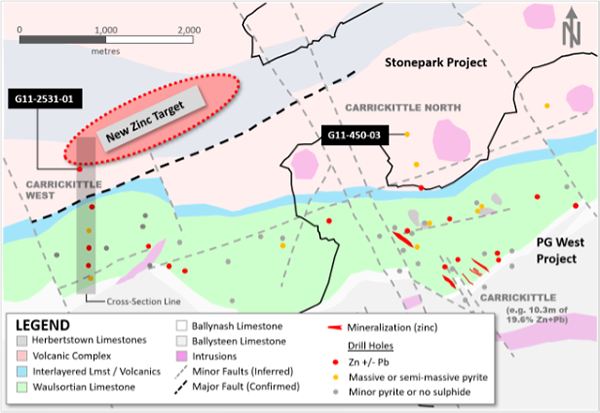 Note: G11-450-03 did not yield any significant zinc or lead intervals

The third hole, G11-2638-06, was drilled as a 150m step-out from the historic drilling near the Stonepark West portion of the Stonepark MRE and returned 6.0m of 0.626% Zn+Pb, starting at 409m including 0.15m of 10.62% Zn+Pb, 0.25m of 3.73% Zn+Pb, as well as, a number of other lower grade intervals (see Exhibit 6). Together with extensive brecciation, this hole demonstrates that the mineralizing system is still present at least 150m to the west. Further drilling is warranted to the north where the trend of mineralization now appears most likely and remains untested. Note, the originally planned step-out hole at Stonepark North was substituted for a similar target at Stonepark West due to logistical priorities.

Technical information in this news release has been approved by Paul Gordon, P.Geo., geological consultant at SLR Consulting, and independent ‘Qualified Person’ as defined under Canadian National Instrument 43-101.