“Given the large step-out, the wide zone of mineralization and grades up to 52.4% Zn+Pb, G11-468-03 is one of the best holes drilled in Ireland over recent years. This fantastic result validates our team’s hard work building a robust geological understanding of our large license area over the last several years,” stated Bart Jaworski, CEO. “Ballywire is situated at the intersection of the Pallas Green Corridor and the south-westerly projection of the famous Rathdowney Trend, which hosts the historic Lisheen and Galmoy zinc mines. Given the above results and coupled with hole G11-468-01 drilled in 2021, Ballywire is starting to exhibit signs of a large system with high-grade zinc-lead mineralization now pierced by three holes over approximately 1.5km. Exploration upside remains wide open reflecting sparse historic drilling. Notably, the next nearest historic hole to test the target horizon to the ENE is 3km away, and yet still hosts an appreciable 5.0m of 1.6% Zn+Pb.”

“Unlike Carrickittle where high-grade mineralization is steeply dipping, Ballywire mineralization appears to be bedding-parallel along the base of the Waulsortian limestone. This implies relatively enhanced tonnage potential, as well as, similarities to the morphology of classic Irish-type zinc deposits. Overall, with our compelling deep target at Carrickittle West announced in June, high-grade massive sulphides discovered nearby at Carrickittle in 2020 and now this discovery at Ballywire, the prospectivity of our extensive land package has never been more exciting. We look forward to updating the market on next steps at Ballywire and our other projects over the near term.”

The Ballywire zinc prospect is located at the intersection of the south-westerly projection of the Rathdowney Trend (which hosts the historic Lisheen and Galmoy zinc mines) and the Pallas Green Corridor (see Exhibit 1). Historic drilling at the prospect was sparse, last being worked by operators in 2008. Group Eleven staked the prospect in 2016 based on compelling results from the two most-recent historic holes. 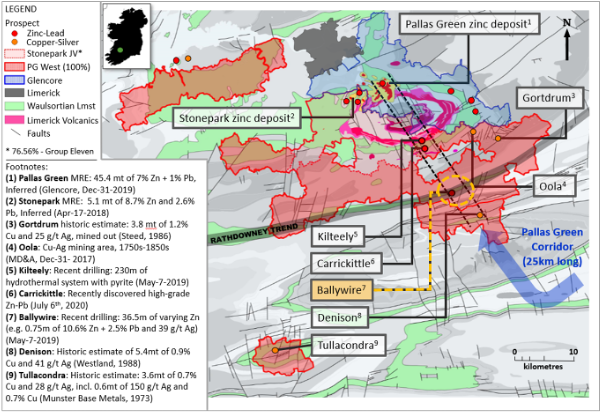 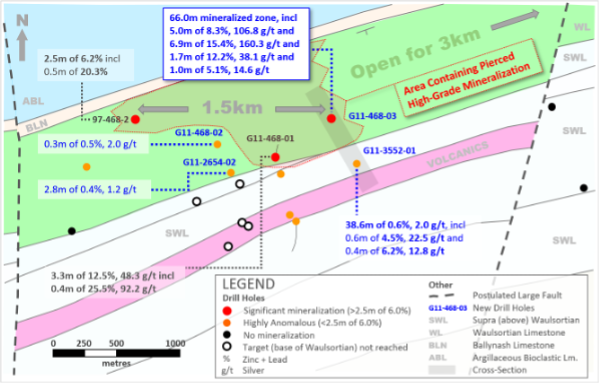 Drilling to date at Ballywire consistently shows mineralized zones to be generally bedding-parallel along the base of the Waulsortian limestone (see Exhibit 3), similar to the morphology of classic Irish-type zinc deposits. The base of the Waulsortian limestone at Ballywire dips to the SSE, shallowing to the NNW. Altogether, high-grade zinc-lead mineralization at Ballywire is now pierced by three holes over approximately 1.5km (see 97-468-02, G11-468-01 and G11-468-03 in Exhibit 2):

The discovery area around G11-468-03 remains open and untested along strike for approximately 3km to the ENE and 1.5km to the W, as well as, up-dip to the NNW for at least 500m (see Exhibit 2). Notably, the next nearest historic hole testing the target horizon to the ENE (99-3552-05) is 3km away and intersected 5.00m of 1.6% Zn+Pb. Immediate follow-up drilling is highly warranted. 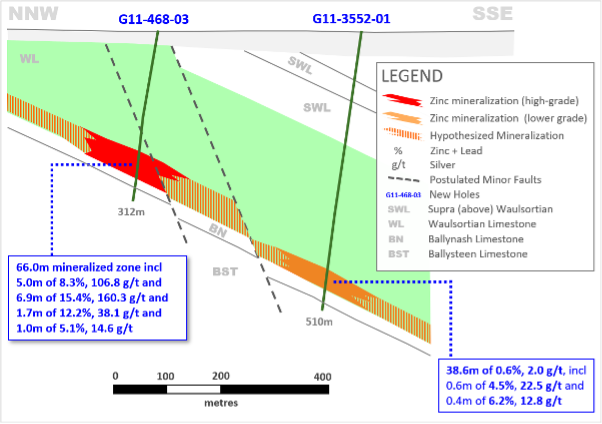 Note: True widths estimated to be 80-100% of the downhole interval

Note that significant zinc-lead mineralization in G11-468-03, occurs not only in the Waulsortian limestone, but also in the sub-Waulsortian lithologies (i.e. Ballynash and Ballysteen limestones; see Exhibit 5). This is not commonly observed in Ireland outside of known zinc deposits and may suggest the robust nature of the mineralizing system and/or proximity to at least one of the feeder structures. An example of high-grade mineralization from G11-468-03 is shown below (see Exhibit 6).

Group Eleven inserts certified reference materials (“CRMs” or “Standards”) as well as blank material, to its sample stream as part of its industry-standard QA/QC programme. The QC results have been reviewed by the Qualified Person, who is satisfied that all the results are within acceptable parameters. The Qualified Person has validated the sampling and chain of custody protocols used by Group Eleven.

ON BEHALF OF THE BOARD OF DIRECTORS

This press release contains forward-looking statements within the meaning of applicable securities legislation. Such statements include, without limitation, statements regarding the future results of operations, performance and achievements of the Company, including the timing, content, cost and results of proposed work programs, the discovery and delineation of mineral deposits/resources/ reserves and geological interpretations. Although the Company believes that such statements are reasonable, it can give no assurance that such expectations will prove to be correct. Forward-looking statements are typically identified by words such as: believe, expect, anticipate, intend, estimate, postulate and similar expressions, or are those, which, by their nature, refer to future events. The Company cautions investors that any forward-looking statements by the Company are not guarantees of future results or performance, and that actual results may differ materially from those in forward looking statements as a result of various factors, including, but not limited to, variations in the nature, quality and quantity of any mineral deposits that may be located. All of the Company's public disclosure filings may be accessed via www.sedar.com and readers are urged to review these materials, including the technical reports filed with respect to the Compa