“We are excited to begin this very important follow-up drill program at Ballywire,” stated Bart Jaworski, CEO. “Results from this program should go a long way towards determining the potential for Ballywire to be a Lisheen-scale zinc system in terms of size and grade. It’s regional location at the cross-roads of two mineralized trends (the Rathdowney Trend and the Pallas Green Corridor), its three holes of robust mineralization over 1.5km strike-length and its proximity to Glencore’s Pallas Green zinc-lead deposit, all bode well for the discovery potential of this area. The presence of elevated germanium is also a potentially significant sweetener that we will, no doubt, investigate further.” 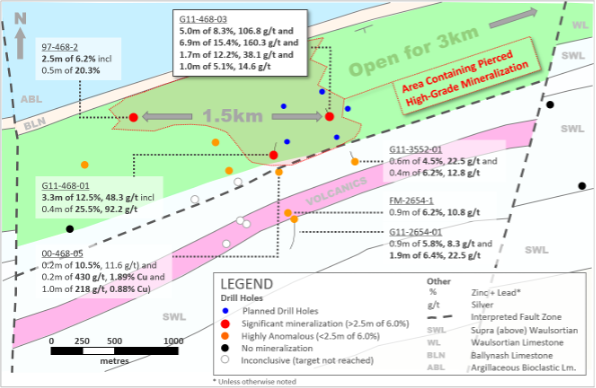 Due to its application in high-tech industries and its scarcity on the Earth’s crust, the element germanium (Ge) has been on the European Union List of Critical Raw Materials since 2010. Other counties that designate Ge as a critical element include US, China, Australia and Canada. The American Physical Society categorizes Ge as one of the ‘Energy Critical Elements’. China produces 80% of global supply of Ge and as of 2019, “no trade agreements existed between China and EU regarding germanium trade,” according to the European Commission. The primary use of germanium is in fibre optics and high-end solar panel technologies. Ge currently trades at approximately US$1,000/kg or US$31/oz (about 40% above the price of silver at US$21/oz).

Outside of some coal deposits, Ge is known to occur in trace quantities within some zinc deposits, including Mississippi Valley Type (MVT) zinc-lead deposits which are present in Ireland. To test this potential, Group Eleven chose nine core samples (each representing a downhole length between 0.29m and 1.17m) of high-grade massive sulphide mineralization from discovery hole G11-468-03. These previous sample pulps were re-analysed using an assay technique specifically suited for gallium, germanium and indium (lithium borate fusion). Results are shown in Exhibit 2.

For global context, Ge does not form stand-alone deposits, instead only occurring as a rare by-product in some zinc or coal deposits. According to the USGS1, the most significant carbonate-hosted zinc-lead-copper deposit that contains notable amounts of germanium is the Kipushi deposit in the Democratic Republic of the Congo. USGS states that Kipushi contains an average grade of 68 g/t Ge. This is in line with Ivanhoe’s recent announcement on Kipushi noting its Mineral Resource Estimate (Measured & Indicated; dated June 14, 2018) hosting 11.8mt of 35.3% Zn, 0.80% Cu, 1.1% Pb, 23 g/t Ag, 13 g/t Co and 64 g/t Ge (see Ivanhoe Mines news release dated Feb 14, 2022). Similarly, the Ballywire results above rank as one of the highest grades of Ge within the known zinc deposits in Ireland.

The Ballywire zinc prospect is located at the intersection of the south-westerly projection of the Rathdowney Trend (which hosts the past-producing Lisheen and Galmoy zinc mines) and the Pallas Green Corridor (see Exhibit 3). Historic drilling at the Ballywire prospect was sparse, last being worked by operators in 2008. Group Eleven staked the prospect in 2016 based on compelling results from the two most-recent historic holes. 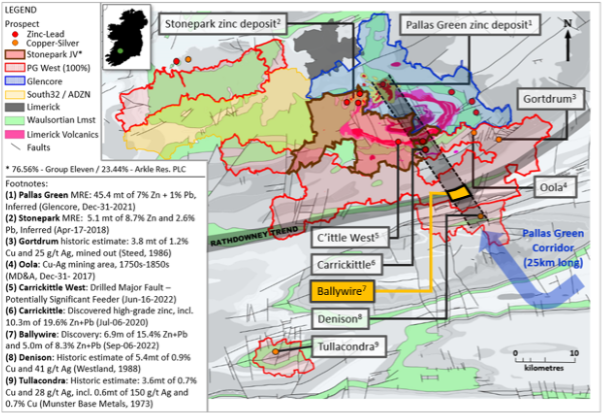 Group Eleven inserts certified reference materials (“CRMs” or “Standards”) as well as blank material, to its sample stream as part of its industry-standard QA/QC programme. The QC results have been reviewed by the Qualified Person, who is satisfied that all the results are within acceptable parameters. The Qualified Person has validated the sampling and chain of custody protocols used by Group Eleven.