Drilling completed by Group Eleven from November 2018 to April 2019 is summarized below:

Ballywire – A 10 Kilometre Extension of the Pallas Green Corridor: Further supporting the concept of a mineralized trend along the Pallas Green corridor is the Ballywire hole, drilled directly on-trend and a full 10 kilometres further to the southeast(see Exhibit 2). 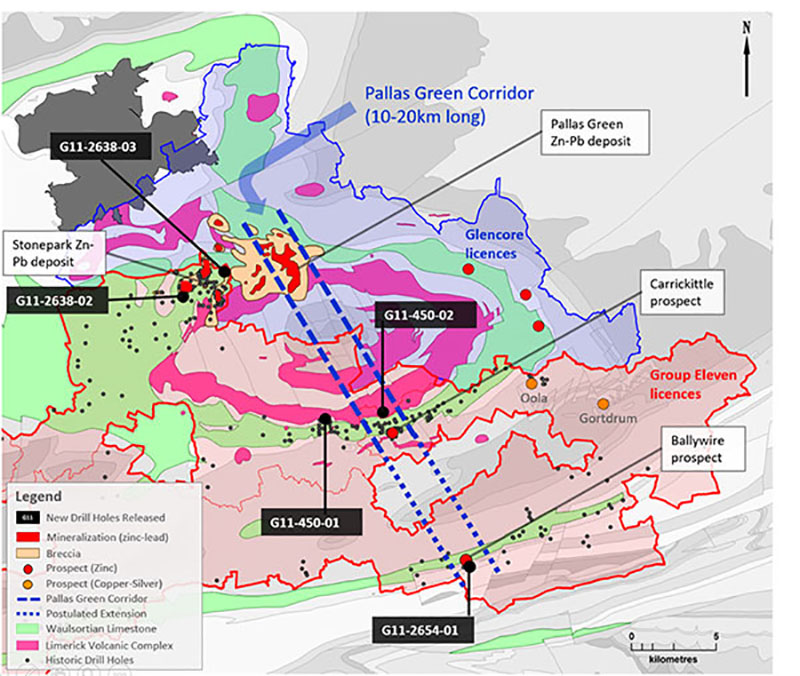 Ballywire – Two Historic Intercepts: The Ballywire prospect consists of two historic holes which each intersected thick (70-80 metre) zones of intense dolomitization at the base of the Waulsortian limestone, including intermittent black matrix and white matrix breccia and dispersed low-grade to localized high-grade mineralization (see Exhibit 3 and 4). Specifically, historic hole 00-468-5 (drilled in 2000) intersected two narrow high-grade intercepts, one of which, was silver and copper rich (0.20 metres of 10.2% zinc + lead and 1.0 metre of 218 g/t silver and 0.87% copper; see Exhibit 5). In 2008, a 350-metre step-out hole (FM-2654-1) intersected narrow high-grade mineralization (0.30 metres of 13.2% zinc + lead) within a wider (1.55 metre) intercept. 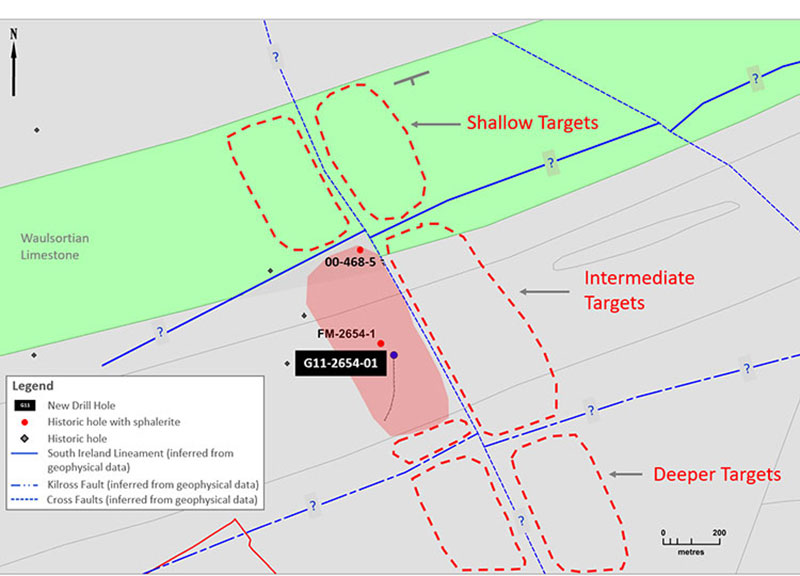 Next Steps: The Ballywire zone is now 650 metres long down-dip, is open in all directions and appears to occupy a block bounded by the postulated Southern Ireland Lineament to the north, the Kilross fault to the south and a cross-fault to the east (see Exhibit 3). Future work will focus on exploring the neighbouring fault blocks. Of particular interest is the area up-dip and to the north of 00-468-5, given its shallow depth and high-grade silver and copper, typically seen as a strong indicator for proximity to a feeder zone.

Southern Half is Virtually Unexplored: The northern half of the LVC is relatively well explored and is closely-related spatially with Company’s Stonepark and Glencore’s Pallas Green zinc deposits. The southern half, however, is virtually unexplored with only one hole drilled historically. The majority of the southern half of the LVC is covered by Group Eleven’s prospecting licenses.

Cross-Fault is Highly Prospective for Zinc: The Pallas Green corridor (NW-SE oriented) is postulated to be cross-cut near the southern end by a significant east-westerly oriented fault. This inferred intersection would be highly prospective for zinc mineralization. A cross-section of this potential ‘feeder zone’ is shown in Exhibit 7. For reference, based on available public information, it appears no feeder structure has yet been found in the northern LVC. 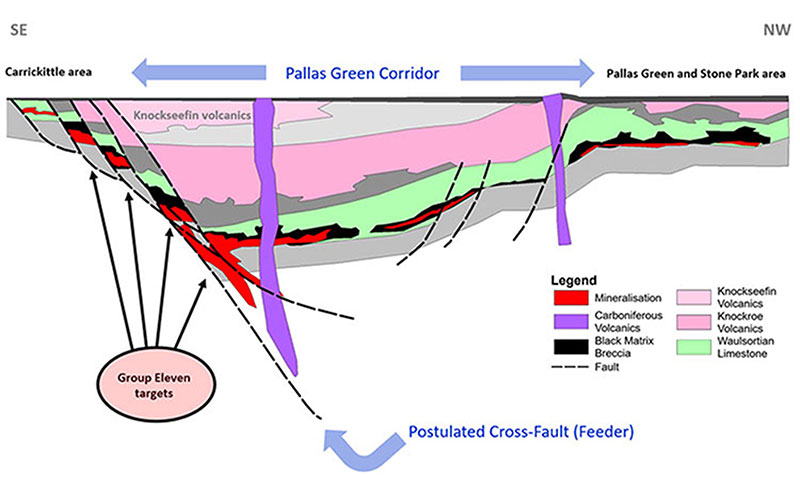 Approaching the Intersection: Group Eleven’s drilling aimed at testing an area 1.4 kilometres northwest of known high-grade zinc mineralization at the Carrickittle prospect (e.g. historic intercept of 2.4 metres of 26.8% zinc + lead and 61 g/t silver; see Exhibit 8 and 9) along the Pallas Green corridor, stepping towards the postulated intersection (‘feeder’) zone. Group Eleven’s rationale was that any geological evidence supporting the idea of a cross-fault and associated hydrothermal activity would be deemed highly encouraging.

G11-450-02 - Strong Hydrothermal Activity Discovered: G11-450-02 intersected a vertically extensive (230 metre) zone (from a downhole depth of 200-430 metres) containing varying amounts of extensive iron-sulfide (pyrite and possible marcasite), chert (suspected to be either volcanogenic and/or hydrothermal) and brecciation (mostly hydrothermal) – within a package of predominantly flat-flying and interlayered volcanics and limestones. The strongest levels of sulfides occur above the Waulsortian limestones. Locally abundant iron-sulfide and black matrix style breccia occur within the Waulsortian limestone unit at the lower end of the sequence. For reference, black matrix breccia, or ‘BMB’, is a key indicator for Irish Type zinc deposits. 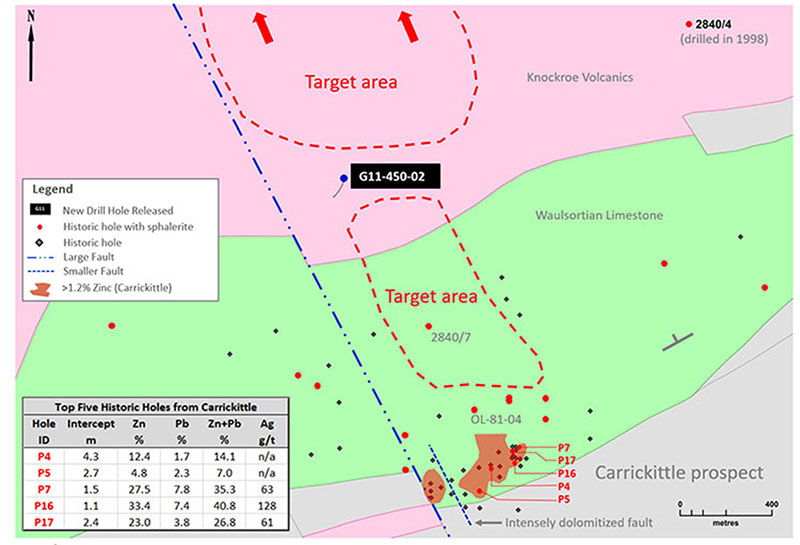 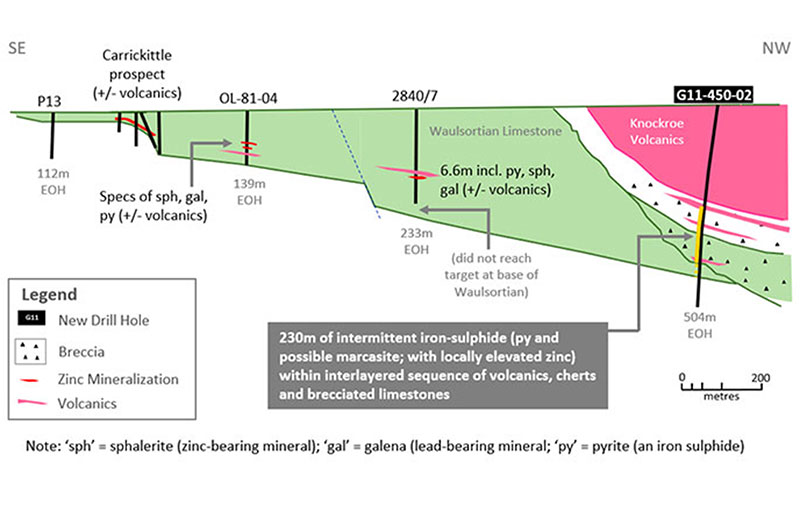 Link to Zinc – Colloform Sulfides and Barite: Iron-sulfide exhibits different textures (including colloform, botryoidal, vein, massive and disseminated) and occurs in multiple stages, suggesting a dynamic system. The presence of colloform sulfides is noteworthy, given it is indicative of biogenic activity and the likely presence of biogenic sulfur, critical to the development of Irish-Type zinc mineralization. A barite vein observed within the limestone breccia, is also possibly important given barite is commonly associated with Irish zinc systems.

Edge of a Zinc System: Within the southern Irish-Type zinc deposits (e.g. Limerick, Silvermines, Lisheen/Galmoy), it is widely recognized that iron-sulfide (pyrite and locally marcasite) is typically observed on the outer margins of zinc-lead mineralization. On the Company’s request, Dr John Kelly from SLR Consulting inspected core from G11-450-02 and prepared a memo with schematic diagrams showing typical zoning patterns in Southern Irish-Type Zinc Deposits (see Exhibit 10). According to this schematic exploration model, G11-450-02 appears to have intersected the “BMB alteration zone, with some or no Zn+Pb”, representing the distal part of a hydrothermal system emanating outward from a notional feeder structure. Corroborating the above interpretation, the nearby Carrickittle prospect hosts high-grade zinc mineralization in close spatial association with vertically extensive pyrite and silicification (chert). 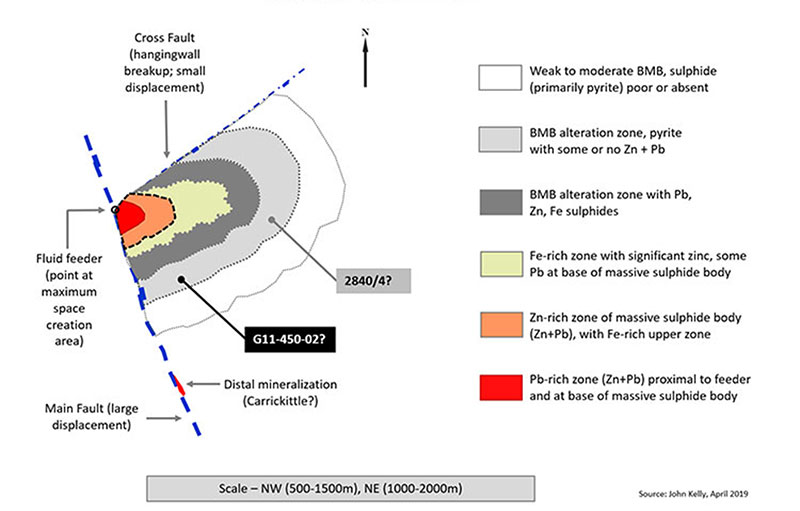 Hydrothermal System could be 1.6 kilometres across: Providing additional evidence to the above statement is historic hole 2840/4 (drilled in 1998). It is the only other hole within the southern LVC and is collared 1.6 kilometres to the east-northeast of G11-450-02 (see Exhibit 8). The significance of the hole was not recognized at the time given it was drilled years before the discovery of Pallas Green zinc deposit (in 2002). This hole intersected stratigraphy similar to that of G11-450-02. Widespread iron-sulfide mineralization and brecciation was also reported. Notably, chert was not observed (albeit, local quartz veining is reported). Assays were not conducted. Group Eleven’s preliminary analysis of the historic log and related reports suggests the intensity of iron-sulfide mineralization, brecciation (and silicification) appears to be stronger at G11-450-02. Based on the above, two observations can be made:

Next Steps: The first batch of highest priority samples (38% of the 230-metre section) have been assayed. More assays and core analysis are planned. Relogging and assaying of the historic hole (2840/4 from 1998) will also be conducted. Future drilling will likely vector northwards towards the notional intersection (potential feeder) zone. More analysis and interpretation are anticipated.

Stonepark West step-out returns strong vector: The Company’s ‘Big Think’ drilling included two holes located within the vicinity of the Stonepark zinc deposit. Hole G11-2638-02 was located 210 metres south of the Stonepark West resource block (see Exhibit 11), testing for north-south oriented control on mineralization. The hole returned elevated zinc and lead (4.3 metres of 0.27% zinc + lead, starting from 305.7 metres down hole), suggesting the hole could be adjacent to higher grade mineralization. Analysing this intercept in the context of surrounding holes and the shape of the Stonepark West resource boundary, suggests the extension of the resource is likely offset towards the south-east. Future drilling will focus on this prospective zone (see ‘target area’ in Exhibit 11). 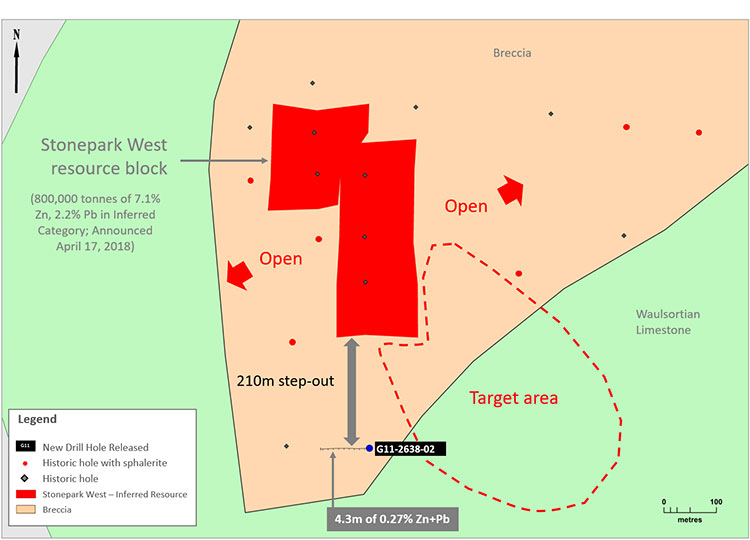 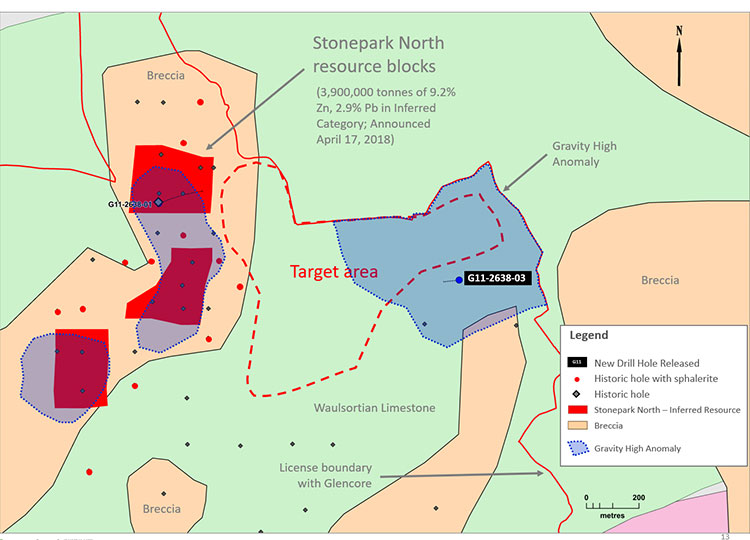 Similarities and Proximity to Carrickittle: The Limerick South prospect is located 4.2 kilometres west of the Carrickittle prospect, within the Waulsortian limestone along the southern margin of the LVC. The prospect consists of 14 historic holes, nine of which intersected zinc mineralization, including TC-450-02 (0.50 metres of 8.0% Zn+Pb) and TC-450-09 (2.9 metres of 1.0% Zn+Pb; see Exhibit 13). 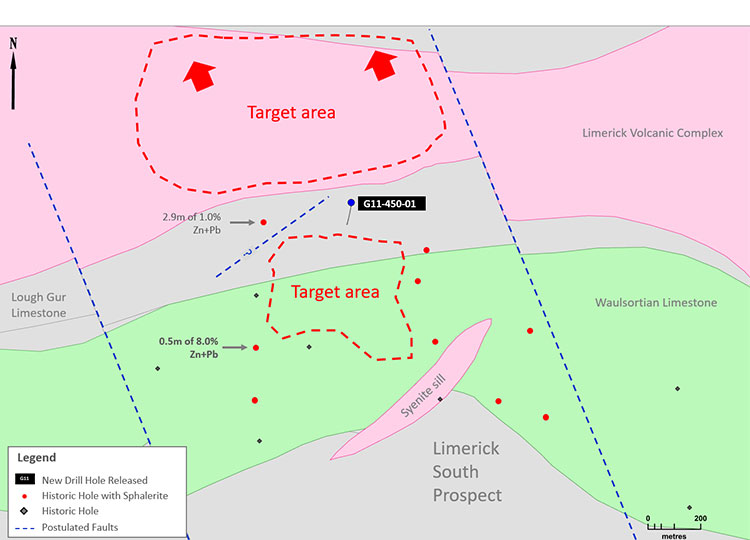 Two Target Areas Defined with Parallels to Kilteely: The Company’s G11-450-01, approximately 350 metres east-northeast of TC-450-09, intersected a 53 metre intercept (starting at 249 metres downhole) with extensive dolomitisation of the Waulsortian limestone, including black matrix breccia and strong levels of pyrite. Vectoring from this hole points towards a roughly 400 x 550 metre target area immediately to the south, as well as, a much larger target area to the north (see ‘target area’ in Exhibit 13). The northern target has ‘Big Think’ potential given it could significantly enlarge the hydrothermal system identified in the neighbouring Kilteely-Carrickittle area.